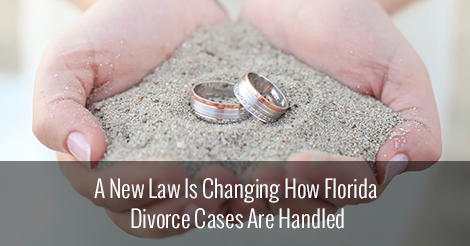 For couples that have had to go through it, calling divorce a difficult time would be an understatement. Even partners that were in cordial terms as they agreed to separate are often left with bitter feelings at the end of the process. There is a strong sense of one’s world coming apart. Someone you hoped to live with for the rest of your life will be walking out the door likely forever.

With such a bleak backdrop, developments in March 2016 are cause for some relief. The Florida Governor signed into law the Collaborative Law Process Act. This law provides an alternative, less contentious and more good-natured way for couples to end their relationship. Florida was the 15th state to pass this law, perhaps a sign that the law was already working fairly well elsewhere.

How does the law work?

The parties to the divorce each retain a family attorney just like they would in standard divorce proceedings. They engage a mental health professional whose job is to ensure the couple experiences as little emotional trauma during the process. The professional would also assist the two negotiate psychological barriers preventing a mutually-acceptable settlement. The subject of finances is a major sticking point in virtually all divorces. Ergo, the couple hires a financial adviser that provides guidance on the financial aspects of the process.

The team of lawyers, finance and mental health professionals then has a meeting (or meetings depending on the complexity of issues involved) where everyone obtains a copy of relevant documentation and shares their views. One striking contrast with ordinary divorce is that this process takes place under strict confidentiality. The public is not privy to the conversations.

The entire process is voluntary and all matters are agreed upon by negotiation. Neither party is obliged to continue with this path to the end. They can drop out at any time and pursue a more standard divorce path. This is not without consequences though. No attorney involved in the collaborative process can represent their client in litigation nor can the financial & mental health professionals be required to testify. For this reason, the attorneys have an interest in the successful conclusion of the collaborative effort.

What are the main advantages of the Collaborative Law Process?

Divorce proceedings usually descend into pretty messy territory. The antagonistic nature of the cases means each party fights to extract the most benefit out of the process. Accusations, harsh words and plenty of dirty linen are bound to show up in court as each partner tries to gain the advantage. Divorce has a traumatic effect on the children especially if it happens when they are in their early years. The collaborative process means the dignity of the family and especially the children is maintained.

The collaborative process by default places everyone along the same trajectory. That pursuit of a common objective means conclusions can be arrived at much quicker than usual. In an ordinary divorce, the goal is to prevent the other party from getting what they want especially because it is seen as being at the other party’s expense.

The divorce is of itself a distressing event. Perhaps the next worst thing about it is how the couple’s private life is dragged into the open. Relatives, friends, neighbors, work colleagues and rivals are served with every juicy detail. Sometimes, what is said is not even true and has only been used by the other party to denigrate their spouse. Regardless, it will be a fixture of the gossip in your circles for years to come. This can have an effect on the couple’s self-esteem but is even more tragic because of the impact it would have on the children. In contrast, the collaborative process means all issues are examined in privacy thus avoiding embarrassment.