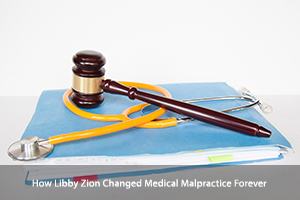 Medical malpractice was steadily rising in the United States throughout the 20th Century. Starting in the 1960s, there was a significant spike in medical malpractice cases that peaked in the 1990s. Dollar amounts awarded to plaintiffs also began to increase, especially in the 1970s after courts began publishing standards for malpractice awards for those who felt their doctors were negligent. One malpractice case in particular, the death of a teenage girl, changed medicine forever.

Libby Zion’s death is one of the most significant milestones in the history of medical malpractice. The 18-year-old went to a New York hospital one night in 1984 with a fever, jerking motions to her body, and agitation. She was admitted for observation and given hydration. Two residents were in charge that night, and both had dozens of other patients to care for. Libby’s condition, especially her jerking movements and agitation, worsened throughout the night. One of the doctors ordered her to be restrained. Eventually, she spiked a 107 degree fever and died, despite efforts to cool her died.

Sidney Zion, Libby’s father, was an established writer for the New York times. The more he learned, the more he became concerned about how she was treated and looked after while at the hospital. He questioned the staffing at the teaching hospital as well as one of the drugs she was given — pethidine. That drug is known to have negative interactions with a drug Libby was taking daily for depression — phenelzine. He also questioned the use of restraints at the hospital.

Sidney went on to use his position as a writer to share his outrage about medicine and medical education. In May of 1986, a Manhattan District Attorney agreed to let a grand jury consider murder charges, which is uncommon in medical malpractice cases. The jury ended up not indicting anyone, but it did harshly criticize the supervision of interns and residents at the hospital. In response, the New York State Health Commissioner set up a panel of experts to look at an evaluate how medical professional were being trained and educated.

Soon after, in 1989, New York adopted the panel’s recommendations. That set limits for how long residents could work, capping them at 80 hours a week or more than 24 consecutive hours. It also required senior staff to be physically present in the hospital. Changes very similar to those were adopted nationwide in 2003.

For the Zion family, the case finally went to trial in 1994 and was heavily covered on Court TV. The Zion family won $375,000 after the jury hedged, saying the both the patient and the doctors shared some of the blame. Sidney said the payment was a “travesty of justice.”

Although the outcome of the trial may not have been what the Zion family expected, Libby became a ‘folk hero’ of sorts for families who had medical malpractice claims. Her case inspired others who felt they were treated wrongly by a medical professional. That, and the sweeping reforms that came after, are her legacy.